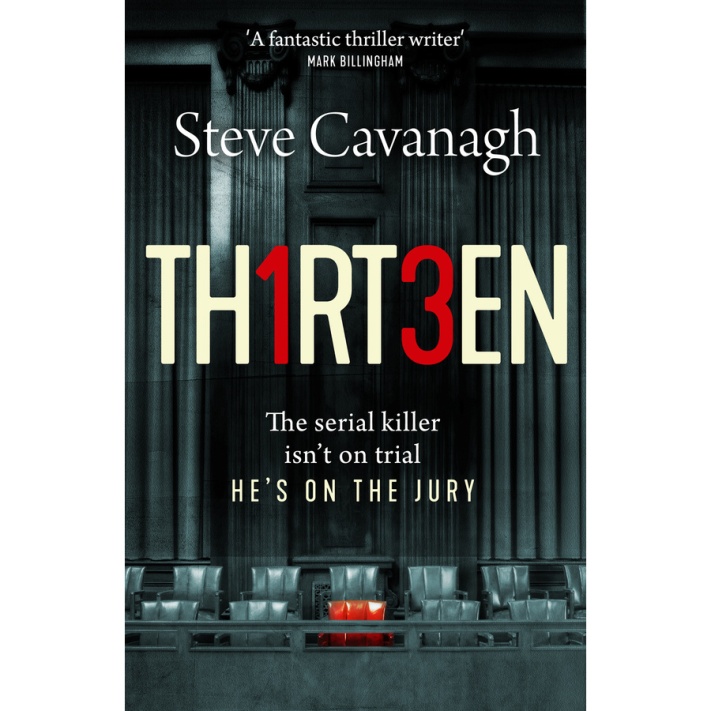 They were Hollywood’s hottest power couple. They had the world at their feet. Now one of them is dead and Hollywood star Robert Solomon is charged with the brutal murder of his beautiful wife.

This is the celebrity murder trial of the century and the defence want one man on their team: con artist turned lawyer Eddie Flynn.

All the evidence points to Robert’s guilt, but as the trial begins a series of sinister incidents in the courtroom start to raise doubts in Eddie’s mind.

What if there’s more than one actor in the courtroom?

Visitors to this occasional blog will know I’m a big fan of Steve Cavanagh and his hustler turned lawyer protagonist, Eddie Flynn. How big a fan I hear you ask? This big:

And why am I such a big fan? Well, I finished this book in February, and this is what I tweeted at the time:

It’s now April (I know, I’m late!) and I’ve gotten through a decent number of books in the last two months. And am I still thinking Thirteen is likely to be the best book of 2018? You bet I am!

Thirteen is very much like the preceding Eddie Flynn books: fast-paced with a wonderful protagonist – and clever. Very clever. And by that I mean Steve Cavanagh throws cases at Eddie Flynn that are seemingly impossible to defend, which hooks the reader from the start. And watching Eddie work through them is watching a genius at work. There is no deus ex machina at work here; Flynn might have a little occasional luck on his side, but he solves them with wit, skill and flare. Which he really needs as in Thirteen he finds himself at the mercy of both corrupt cops, and a serial killer who has literally gotten away with murder many, many times.

Reader, Writer, Arithmeticer. Not always in that order.
View all posts by djpaterson →
This entry was posted in Writing. Bookmark the permalink.