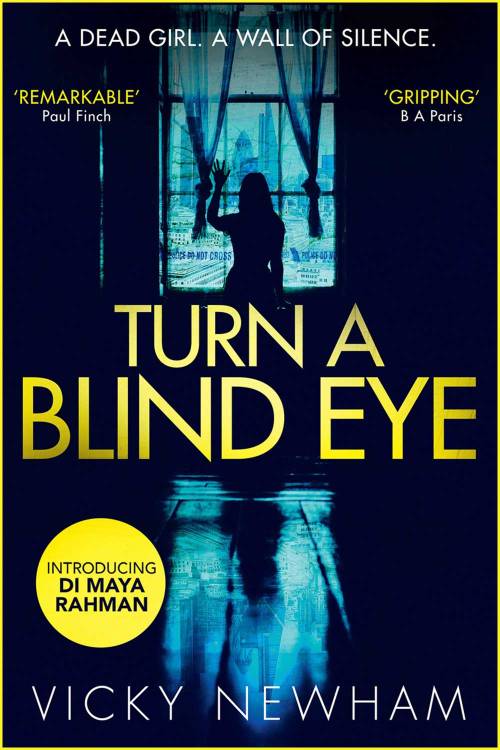 A dead girl.
A wall of silence.
DI Maya Rahman is running out of time.

A headmistress is found strangled in her East London school, her death the result of a brutal and ritualistic act of violence. Found at the scene is a single piece of card, written upon which is an ancient Buddhist precept:

I shall abstain from taking the ungiven.

At first, DI Maya Rahman can’t help but hope this is a tragic but isolated murder. Then, the second body is found.

Faced with a community steeped in secrets and prejudice, Maya must untangle the cryptic messages left at the crime scenes to solve the deadly riddle behind the murders – before the killer takes another victim.

Turn a Blind Eye is the first book in a brand-new series set in East London and starring DI Maya Rahman.

Vicky’s Newham’s debut police-procedural novel is a cracker! DI Maya Rahman is Bangladeshi but has been living in London for most of her life, and this novel explores the strands of racial diversity that make up London’s Tower Hamlets. The school mentioned in the blurb above is Maya Rahman’s old school; she knows it well, and she knows the problems its pupils face. But Rahman’s own life is complicated too. The story starts following the death of her own brother, and this is the first glimpse we get into the issues of culture and identity that Rahman herself is trying to feel more comfortable with.

The book delves deeply into racial and cultural diversity and it’s clear that it draws on the author’s experience of having been an East End teacher herself. Even Rahman’s sidekick, Aussie Dan Maguire, has an aboriginal wife and family back home in Australia.

There’s a large cast of characters here, and we are given a number of different viewpoints. This could easily have been confusing, but skilful writing and structuring stopped that from happening – not an easy task.

I’m not from London, but from an outsider’s perspective, the atmosphere felt very real indeed, and the plot kept me guessing until the end. A great start to what is undoubtedly going to be a successful series.